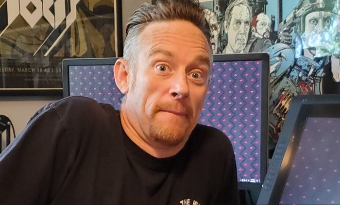 Eckard’s influences can be felt throughout the esports industry’s fashion zeitgeist, particularly due to his involvement with organizations that have since become household names. In particular Evan’s collaboration with esports organization 100 Thieves defines the modernization of competitive gaming apparel, setting off a wave of imitators and emulations that has yet to crest.

His other works extend from collaborations with tech startups, as with the branding, UI, and user experience tailoring done for music streaming app Pretzel Rocks, to pop culture media giants, with a career involving internationally renowned celebrities and influencers both in and outside of gaming. Eckard has worked branding and design for rock legend Marky Ramone, as well as merchandise design with Counter-Strike superstar Michael “Shroud” Grzesiek, among others of similar acclaim.

With AoE Creative, Eckard expands on both his experience in marketing and design, and the mentorship he’s given to others as senior designer and creative director at the various startups he’s helped grow. And with the relative youthfulness of the esports industry in particular, he sees a massive opportunity with AoE Creative to redefine best practices, tailoring the creative agency experience to something that optimally fits the unique demands and practices of the gaming and esports industry.

Co-founder and Chief Creative Officer Markel Lee is especially excited by the parts of Eckard’s skill sets that tend to get overlooked or underutilized by the industry in the status quo. Along with his proven talents in merchandise design and UI/UX, both Lee and Eckard are aficionados of package and physical print, which “most people in the gaming and esports community fail to consider.”

This will not be their first collaboration. Said Lee: “It’s been great working remotely with him in the past, and this is a bigger and better opportunity to have him in-house, so that we can work, learn, experience and grow.”

AoE Creative was founded in 2018 by industry veterans Simon Bennett and Markel Lee, specializing in gaming and esports-focused marketing, social media operations, and brand design. The company’s award-winning campaigns have enabled the prestige and public acclaim of such organizations as the Houston Outlaws, Nerd Street Gamers, and many others. AoE Creative’s diverse staff represents not just over a century’s worth of collective industry experience, but also an eclectic range of perspectives and capabilities that uniquely strengthens their creative capabilities.